Obsessive Compulsive Disorder (OCD) is an anxiety disorder characterised by obsessive thoughts and physical and/or mental compulsions. It is a common problem but one that can be very disabling for people. The World Health Organisation lists OCD as one of the top ten disabling illnesses in the world.

You can access more information and support from the following organisations:

You may also benefit from these two self help guides:

Cardiff and Vale UHB: Obsessions and Compulsions - A Self Help Guide 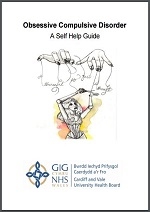 You could also have a read of these self-help books - click on the cover for a preview on Google Books: